Check us out on Channel 13 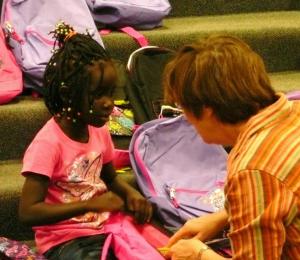 NCJW’s Backpack Project was a resounding success this year! In response to the “Back to School With NCJW Backpacks” appeal, we raised quite a bit of $$$. Savvy shopper Ginny Eklund has been collecting bargain backpacks and school supplies all year. About a dozen members made short work of packing the backpacks last week. On Wednesday, Sept. 3, we were rewarded by big smiles on little faces as kindergarteners selected a new backpack and discovered the crayons, markers, scissors and pencils inside. Channel 13 news turned up for the Reiche School open house and ran this feature on the evening news, which includes a brief interview with Section President Lynn Goldfarb. In all, we provided 225 backpacks to Reiche, Riverton and East End schools, the Portland schools with the highest number of children from low-income households. Thanks to the generosity of NCJW members, every kindergartener at those schools has the basic tools they need for learning.

The National Council of Jewish Women (NCJW) is a grassroots organization of volunteers and advocates who turn progressive ideals into action. Inspired by Jewish values, NCJW strives for social justice by improving the quality of life for women, children, and families and by safeguarding individual rights and freedoms.

As a member, you help to provide services and advocate for issues important to women, children and families. There is strength in numbers.
© NCJW/Maine 2014