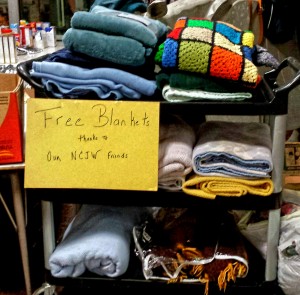 udents took their holiday break, the school and Wayside Community Meals hosted a free dinner at the school. Families were able to take home food provided by Good Shepard Food Bank, and warm blankets donated by our members. This was in response to a special request from Reiche, a Portland school where we’ve developed a close relationship with students and staff. NCJW has provided backpacks filled with school supplies to entering kindergarteners, and volunteers have helped students with reading and math throughout the year. About 20 blankets were handed out on December 21, just in time for the cold weather that arrived with the new year.

January 22 marks the 43rd anniversary of Roe v. Wade, the Supreme Court decision affirming every woman’s right to make her own decision about abortion according to her own religious or moral beliefs. But opponents are trying to chip away at this right in state after state by imposing burdensome restrictions which narrow access to safe, legal abortions. Later this year, the U.S. Supreme Court will hear Whole Women’s Health v. Cole, a Texas case challenging severe limitations on clinics, limitations which the American Medical Association and the American Congress of Obstetricians and Gynecologists oppose. The outcome of this case could affect abortion access nationwide. Learn more by listening to an NCJW conference call Tuesday, January 19, from 7pm-8pm. “Courts Matter: Abortion Access under Threat,” will include experts at the Center for Reproductive Rights, whose litigation team is arguing this case at the Supreme Court. Find out about the core issues, the context, and implications that a decision in Whole Women’s Health v. Cole could have on the health, rights, and lives of women across the country. You can get ideas to make a difference on the issues of abortion access and our federal courts, particularly during this presidential election year. To listen in the convenience of your home, RSVP today to receive call details. (Click here to learn more about Whole Women’s Health v. Cole.)

Join the Jewish Day of Action to End Human Trafficking

January is Human Trafficking Awareness month. Thursday, January 14, Jewish women are mobilizing on social media in opposition to human trafficking. Please join NCJW, Hadassah, and the Women’s Zionist Organization of America, Inc., as we raise our collective voice, online and in communities nationwide, to energize grassroots involvement and spur community action to #EndHumanTrafficking. Visit Thunderclap to coordinate your posts on Facebook, Twitter and Tumblr.

Pat Reef, our chair for Israeli Affairs, recently participated in a conference call set up by Rebecca Krevat, NCJW Community Engagement and Communications Associate, at the Washington, D.C., office. About a dozen representatives of NCJW section boards across the country (including California, Long Island, St. Louis, and Louisiana) dialed in Wednesday, December 9, 2015, for a briefing from Shari Eshet, director of the NCJW Israel office.

Security issues were the top priority. Certainly, we see the problem every day in the news.

Gender equality is another important issue. Eshet outlined the difficulty in getting a divorce in Israel. The challenge is getting female representation on the Rabbinical Courts which govern family law, most notably divorce.

There has been progress in gender equality. Israel’s government recently acknowledged the importance of the issue by creating a cabinet level position — Minister of Gender Equality. Seven years ago no women served on the nominating committee for Rabbinical Court judges; now four women serve on the nominating committee. Still, the ultra-Orthodox community continues to wield an outsize political influence which seeks to restrict the role of women in Israeli society.

NCJW recommends two resources for those who want to learn more. I have sent away for a book, The War on Women in Israel by Elana Maryles Sztokman. I will read it, report on it, and make it available to anyone who would like to read it.

For a look at how rocket attacks affect Israeli life, the documentary film Rock in the Red Zone, directed by Laura Bialis, focuses on the music scene thriving in the town of Sderot less than a mile from the border with Gaza. I do not know whether it’s out in DVD, but I will look for it. It has been screened at various Jewish film festivals.

New Year’s Message from our President

It is my pleasure to wish each of you L’shanah tovah tikatev v’taihatem. Though the Jewish New Year 5776 is just beginning, our NCJW year began on June 30. Despite all the visitors crowding in during our glorious Maine summer, we’ve had a very busy and successful few months.
Our first event was the Wine Tasting and Mini-Auction August 13 at the new Press Hotel. I am happy to report that we raised more than $5,000. We also received incredible publicity on the Scene & Heard page of the Maine Sunday Telegram. The very favorable article on the work of our section was augmented online by a wonderful slideshow of photos of attendees.
Not to rest on our laurels, on August 30, a very hot and humid evening, 10 members met at Ginny Squire-Eklund’s home to pack 250 backpacks with pencils, erasers, pencil cases, crayons, scissors, and markers to be distributed to every entering kindergarten student at Reiche, East End and Riverton Elementary Schools in Portland. The entire operation was completed in one and a half hours while a photographer from the Forecaster took pictures. One of these pictures with an appropriate caption appeared in both the Portland and Northern Editions of the Forecaster. A few members met at Reiche at 8 AM, on September 3 to watch adorable kindergarteners ponder over which patterned backpack to select.
That evening we sponsored the opening of Welcoming the Stranger at the Maine Jewish Museum. Portland native Jo Israelson designed the installation, which highlighted the work of our Section in its very early years when members provided kosher food to immigrants detained at House Island. The opening attracted 150 people. A review of the installation was the feature article in the Arts Section of the Maine Sunday Telegram September 6. If you haven’t seen this wonderful installation, be sure to visit the Maine Jewish Museum before the exhibit closes on October 26.
Links to all these articles can be found on our website. I and my fellow board members look forward to having many of you increase your involvement with NCJW even as we seek new members to join us in our journey through the New Year.

Those who attended the opening of Jo Israelson’s multimedia installation at the Maine Jewish Museum Thursday, September 3, 2015, entered under a hand-woven Abraham’s tent stretching overhead, trod on a floorcloth stenciled with images of seaweed from House Island and compass roses, and past walls covered with the word “begat” over and over. One room featured weavings created by diverse members of the Portland community. Upstairs, seven artistic aprons represented “Sarah’s Generosity,” the seven members of NCJW who provided kosher food to immigrants arriving at the House Island quarantine station in the 1920s. Israelson contrasted the 1923 odyssey of Hungarian immigrant, Bela Gross, with the stories of those newly-arrived in Portland today. NCJW provided the food and drinks for the reception, which drew a large crowd. After thanking all those involved in the exhibit, Israelson invited everyone to weave their own contribution on a loom set up near the refreshments. Read all about the exhibition in the Maine Sunday Telegram. Don’t miss this opportunity to review the treatment of immigrants in Portland during the 1920’s and today. The Museum at 267 Congress Street in Portland will be hosting the installation until October 26, 2015. 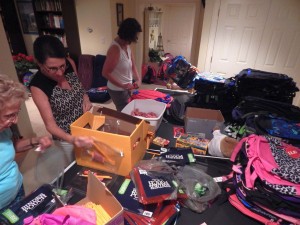 About a dozen members turned out Sunday night, Aug. 30, 2015, for the annual backpack packing party in Falmouth. Ginny Eklund provided food and drink to fuel volunteers who stuffed 250 backpacks with pencils, erasers, scissors, markers and crayons. The backpacks are destined for kindergartners at three Portland public schools so all students have the educational tools they need to start school. Check out the item in the Falmouth Forecaster!

Read all about our wine tasting and silent auction in this Maine Sunday Telegram article. Margaret Logan’s photos and story highlight our progressive goals of improving the lives of women, children and families. Thanks to everyone who helped make the event at the Press Hotel a success. A special salute goes to Eileen Arsenault, who remained on duty at the check-in desk despite breaking her ankle in a fall. Now that’s dedication to our cause! 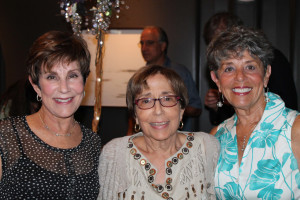 Auction Items for Every Taste

Her are the fabulous items you can bid on during the silent auction at the NCJW Wine Tasting Thursday, August 13th, at the Press Hotel.

A Week in Tuscany 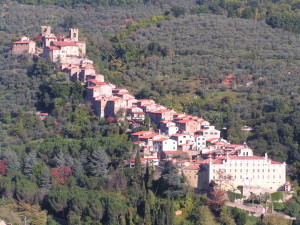 Private apartment sleeps five
Time to be arranged within one year
Hillside town of Collodi, home of Pinocchio’s creator
See the Gardens of the Villa Garzoni
Midway between Florence & Pisa
Photos of the apartment 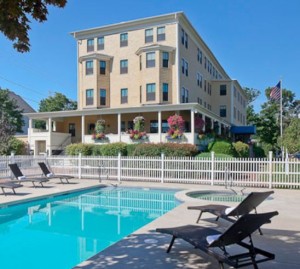 One hour massage for two at Akari
OR two one-hour massages
Indulge someone you love!

Two sets of two tickets to any shows in 2015
La Cage aux Folles closes Aug. 15
Beehive, the 60’s Musical, Aug. 18-29
Professional musical theater in a beautiful New England barn
Catch the stars at the start of their careers! 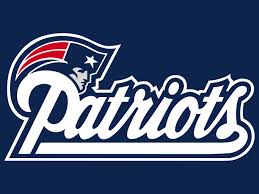 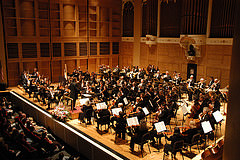 Two tickets to any 2015-2016 Portland Symphony Orchestra Classical or Pops! Concert
Dinner for two before or after at the Press Hotel’s Union Restaurant
Concert at Merrill Auditorium just across the street from the restaurant

Dinner and a Show 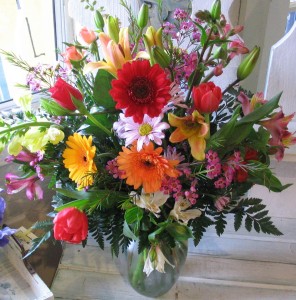 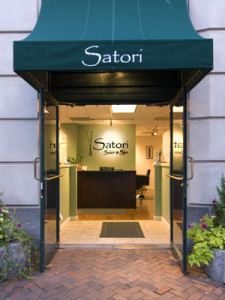 In order to conserve our past, the Board has voted to have all of NCJW’s extensive records dating back to 1922 permanently archived at the Jean Byers Sampson Center for Diversity in Maine, part of the Special Collections at the University of Southern Maine Libraries. These fragile materials will be correctly preserved for the use of students, faculty and researchers, while our Section retains title to all the content. Our Section will bear none of the cost for this service and may continue to add to the archive. Thanks to all those pack rats who kept our materials safe in their desks, garages and attics. And please contact us if you find anything related to NCJW in your files.

The National Council of Jewish Women (NCJW) is a grassroots organization of volunteers and advocates who turn progressive ideals into action. Inspired by Jewish values, NCJW strives for social justice by improving the quality of life for women, children, and families and by safeguarding individual rights and freedoms.

As a member, you help to provide services and advocate for issues important to women, children and families. There is strength in numbers.
© NCJW/Maine 2014